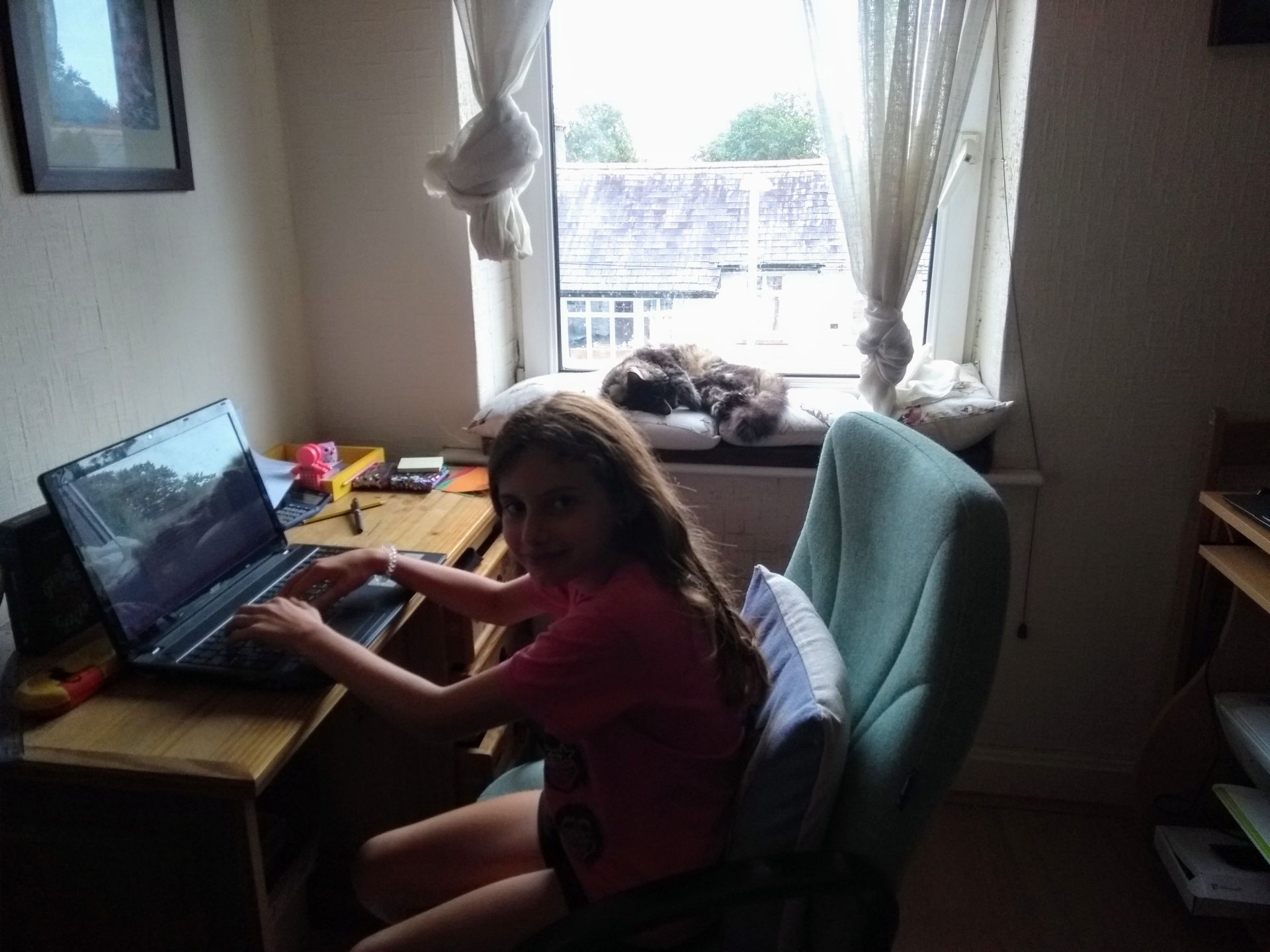 The Night I Got Locked in the Museum

“Right, all onto the bus, come on now” Mr Edwards called as he herded us onto the Mayhill’s red school coach. “We don’t want to be late for the staff at the Swansea 1940s Museum.

“The museum’s not going anywhere, its history!” Charlie’s joking voice whispered in my ear. I rolled my eyes and pushed him in front of me. My other friend, Libby, was behind me when we jostled onto the bus. We took a row of three seats somewhere near the middle of the coach and sat in excited silence for the twenty minutes it took to get to the WW2 museum in Swansea.

Waving the bus into a parking space, a man with a little ginger beard and bald head welcomed us at the front doors.

“I am Sam, your museum guide for this afternoon” He told us happily. “You will learn all about the 40s!” He led us to a tin tunnel with one entrance.

“Let’s start here. These were called Anderson Shelters and people dug them into their garden to run to when the bombs started falling” He then let us go round a model WW2 street answering questions on a worksheet. Me, Libby and Charlie went round in a group. Libby grew increasingly annoying when she squealed and ran away at any plastic dummy positioned in the fake buildings, and then blushed at Charlie’s easy laugh.

Mr Edwards thanked the curator for his hospitality at the end of the day.

“Our pleasure” a voice croaked from behind Sam and a few people screamed, including Libby.

“It’s a moving dummy!” Someone yelled.

Hunched behind our museum guide was an old woman. She had gnarled fingers and white-grey straggly hair that hung around her shoulders.

“It is not a moving dummy, dummies don’t move. They are made of plastic, which is constructed by moulding extracted raw materials and-” Walter, the smartest boy in the whole school began.

“Anyway, this is Greta, the museum’s caretaker.” Sam interrupted “She is old enough to be part of it too” he chuckled. Greta gave him a glare and told him that she was only eighty three.

Charlie whispered something in Libby’s ear and she burst out in proper laughter, not giggles for a nice change.

“WW2 is not something to joke about” Greta told us sternly. She bustled away, and as she passed me, Charlie and Libby she whispered something: “…as you soon will see”.

We looked at each other puzzled. Libby suddenly realised that she had left her water bottle behind and went back to retrieve it, with us following behind.

Getting to the seats, Charlie turned to a plastic box holding WW2 costumes. He took a gasmask out, and pulled it over his head and while making Darth Vader sounds he also tried on a helmet.

“Let’s go!” I cried, but now Libby was digging though the clothes and had pulled out a flowery hat. I had to plead for five minutes more, before they finally put everything away, giggling. We ran down the corridor and skidded to a halt when we saw the bus leaving. Greta turned around, and gave us a toothless grin. I was feeling very worried now. She closed the museum door and turned the key with a click. As she walked away down the concrete yard, I realised that she had locked us in!

Suddenly, the sky seemed to burst open and a heavenly, dazzling white light streamed down. There was an eerie silence, and then I could see hundreds of bombs being dropped around us. Incendiary bombs set fire to the museum while others took huge chunks out of the earth. We pushed the now half broken door open and ran out of the burning building. People dressed in military uniform ran past clutching gas masks to their faces. Libby screamed and in the chaos, I couldn’t see her.  Firefighters sweated as they tried to control all the flames, but as soon as they put out one fire, another one demanded attention. The air raid siren had been wailing spookily for a while now and constant ringing was coming from the bells on top of the fire engines. I reached out in the smoke and grabbed Libby’s hand, dragging her towards me and she pulled Charlie with her.

“What the hell is going on?” Charlie yelled. I shrugged with my mouth agape.

I shouted “Are the bombs real?”  Libby pulled her leggings up to show her bleeding, bruised knee; yes they were real alright.

Jogging urgently towards us was a man I had never seen before. I couldn’t make him out properly in all the smog. Yet as he came closer, I caught a glimpse of an amiable face.

“Into the shelter, quick quick!” He hauled us into an Anderson shelter. Closing the door, he turned towards us. With a tin helmet on his head, gun by his side and military uniform buttoned up to his neck, he looked very intimidating, even though his face appeared kind. Charlie wasn’t intimidated though.

“What on earth is happening?” Charlie demanded “One minute we’re locked in a museum in 2020, and then we are in the middle of an air raid and everyone is in fancy dress!”

The man stared at him.

“My god son, do you need a doctor? It’s 1941 during the Swansea blitz. The bloody Luftwaffe is targeting our docks to cripple coal supplies going out.”

It was our turn to stare at him. “But we’re just ten year olds from Mayhill Grammar School!”

“What? The boy’s school up on that hill? What are you doing there? It’s got unexploded bombs hiding in its depths from when it was hit! Everyone sensible stays away from it.”

Charlie looked gobsmacked. He glanced round at me and then urgently asked the man if he knew where the bombs were.

“Yes, bloody hell, you’re behind on your war homework. Yes one is underneath the floor of the gym, and the other in the bike shed on the left of the school” He answered.

“Bike shed? But no one rides bikes to school anymore!” I said confused.

I grinned at him, and then my face fell. I asked them how we were going to get back.

Libby hopefully said that maybe Greta could turn everything back to normal. I explained to her that we had no access to the present time and we could not communicate with Greta. It was very hard not to roll my eyes.

“Greta? I know someone of that name…” The man said, interrupting our conversation. Charlie asked him where she could be.

“Definitely in the public shelter, she doesn’t have room for one in her garden. In fact, here she is now!” The museum’s caretaker was the same age in 1941 as she was in 2020 and panting as she struggled inside the shelter. She grinned at us and asked matter of factly whether we had found out anything interesting.

Libby burst into tears and screamed that she wanted to go home right now.

“Blooming heck, that’s why I never bothered with kids!” The old man said, looking horrified. Greta pulled out a key and beckoned to us. We followed her out into the chaos, and helped her avoid danger. She got to the front doors of the crumbling museum and we saw that the keyhole was untouched, shiny and gleaming, as it was when we got off the Mayhill Grammar School bus. She wriggled the key round till it went click, and suddenly the world froze. The sounds of the bombs got fainter and the people were being slowly sucked up into the heavens. The man who had talked to us in the shelter was frozen in his last act of being speechless.

Suddenly, our school coach was travelling towards us, and Mr Edwards looked worried and then relieved when he saw us at the museum’s double doors.

He waved for the driver to stop and jumped off.

“Thank goodness you’re here!” He gabbled. “We counted the class when we got back to school, and you three were missing.

“Sir, SIR!” Charlie said “When you left us here, locked in, we had a better look around the museum and found out, because of an old newspaper display, that there are two unexploded bombs in our school! One is in the floor of the gym, and the other in the bike shed!”

At first Mr Edwards didn’t believe us. Then the school called over bomb disposal experts from the armed forces and they proved that we were right. They removed the bombs carefully, and the school was safe again.  But you may be wondering why Charlie didn’t blab about Greta. First of all, well, he isn’t a snitch! Secondly, it’s because who would believe that history can come alive with the click of a lock? Greta didn’t give the first impression of being someone who would have a magical key that could let her, and whoever is in the museum at the time, travel back into history. But things aren’t obvious on first meeting. You need to get to know people. Greta is still at the museum. She’s retired, but likes to be useful and we help her too. Every now and then, you see the glint of excitement in her eye, and you know she is going to time travel to help people who might need her.
Copyright © 2020 Little Creative Days Ltd. All rights reserved  - Created with